He was called Evil-Eyed Emil. When he looked at people with his infamous right eye, so the story went, bad things invariably happened. Townspeople cringed and covered their faces as Emil came near, not daring to look directly into his ominous orb. And, as he was being driven out of Reaper Junction on Halloween night […] 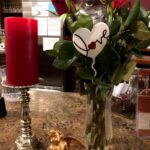 Treat your sweetheart to…