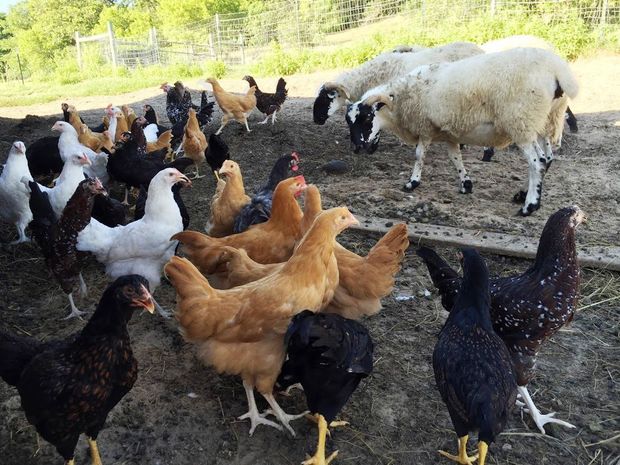 The three dozen chicks we got back in May are now chickens. Recently they had their first taste of the outdoors when we cleaned their coop. The birds were reluctant to leave the coop; we were forced to carry most of them out, but once they were in the barnyard they started exploring and scratching in the dirt. Our Scottish Blackface sheep and miniature donkeys were quite curious to visit the neighbors but the feeling was not mutual and the flock scattered.

Sexing chicks is not an exact science. Although we ordered Speckled Sussex, White Orpington and Buff Orpington hens, there’s at least one rooster of every breed. We ordered a straight run of Dark Cornish and about half of them are roosters. Our bonus bird is a Blue Cochin and we suspect he is a rooster too.

One of them is starting to crow and another is acting like a bully. It’s time to start sharpening the axe.