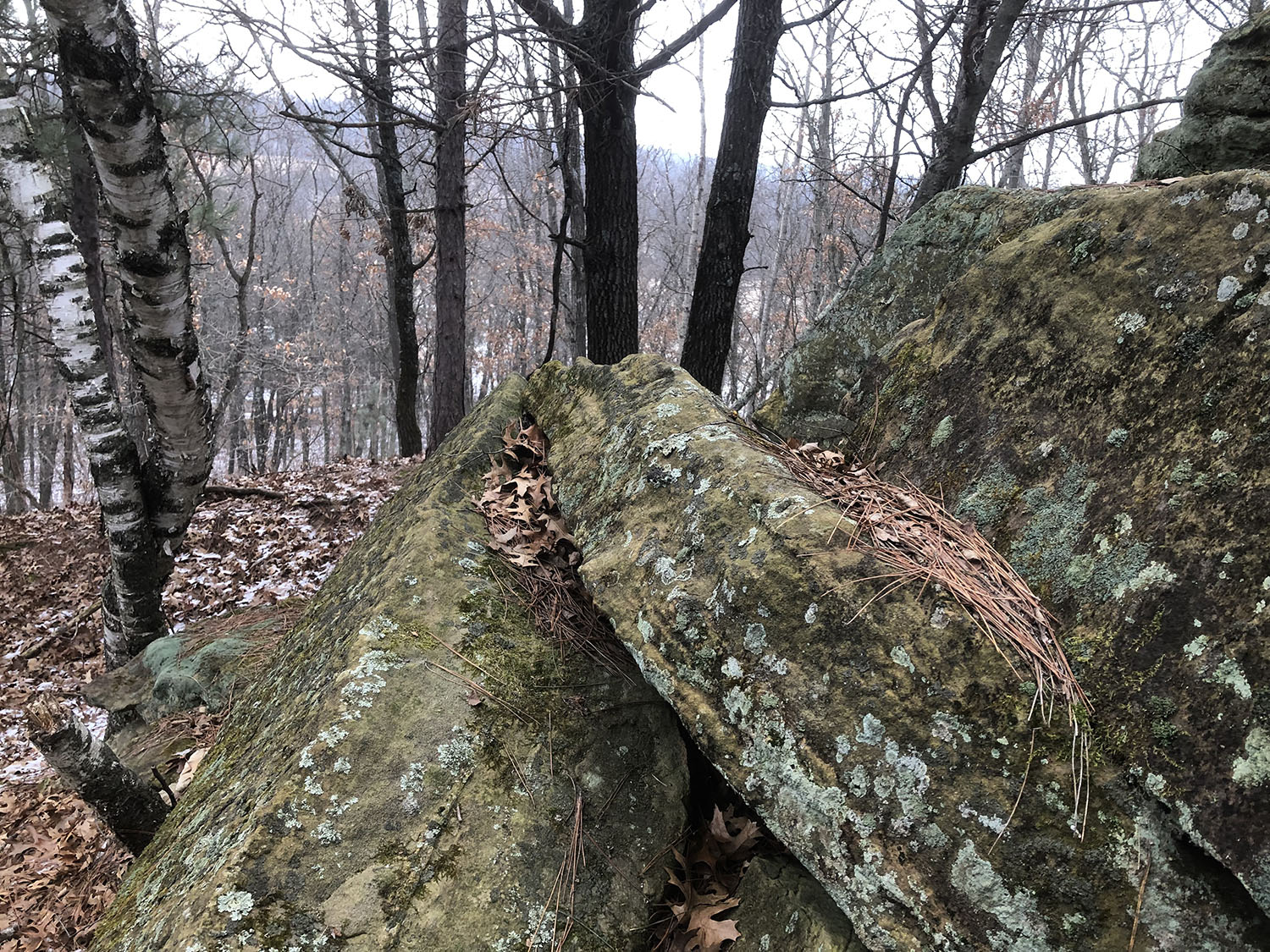 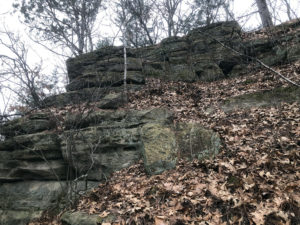 Region’s rocks are testaments to the past

I stood atop a small outcropping of rock in the waning hours of 2018.

These rock formations are quite common on our farm and in the Driftless Area. Geologists classify the rock as glauconite, also known as greensand for its dark color. It’s a sandstone formed from a continental shelf marine environment hundreds of millions of years ago.

I had been cutting some dead oak trees for firewood below this rock formation and decided to take a little hike to the top, where pine trees had been planted decades ago. It’s known in our family circles as Pine Bluff.

At least four generations of family members have visited Pine Bluff, leaving behind carvings of their names, initials and sometimes dates in the soft rock face. My first visit was probably in the late 1960s. It had been quite a few years since I had trekked there.

I did find the carvings of some relatives and a few others that have been to the bluff. But a big chunk of the rock formation with a large facing has collapsed, covering the carvings forever.

As I paused at the top only a few hours before the calendar turned another year, I thought about the relentless march of time. We are a society that lives in the moment, with instant gratification and communication made easier with the ubiquitous nature of technology and social media.

But here I stood on a piece of rock formed millenniums ago. How many others before me have come to this spot? How many will come after me? What will we leave behind?

The concept of using sandstone as a canvas for carving or art is nothing new. Not too many miles down the road is a special archaeological treasure. Gullickson’s Glen is a rock shelter where Native Americans visited thousands of years ago, leaving behind spectacular carvings. The rock art — or petroglyphs — conveyed messages and symbols when there was no written language.

Gullikson’s Glen petroglyphs were first catalogued in the 1930s and included deer or elk, birds, fish, dogs and humans. Archaeological research has suggested that Gullickson’s Glen was a stopping point between Oneota era settlements along the Mississippi River and Silver Mound near Hixton, Wis. Silver Mound Is a large sandstone hill that contains layers of cemented silica called Hixton Orthoquartzite that was used by Native Americans to chip stone tools. Tools from Silver Mound have been found all over the Midwest, including a spearpoint that my wife Sherry found in our garden about 20 years ago.

It’s difficult to date rock art, but some of the carvings at Gullickson’s Glen may date back as far as the Archaic period — 8,000 to 1,000 B.C. — according t 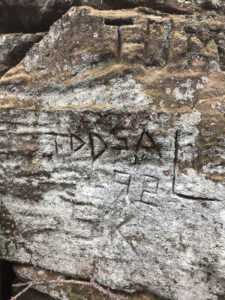 o Robert “Ernie” Boszhardt, an archeologist who co-authored the book “Hidden Thunder: The Rock Art of the Upper Midwest.” Others were from the

I visited Gullckson’s Glen several times when I was a kid, hoping to find a spear point or arrowhead which were also left behind. But time — and vandalism — has taken its toll on the site. Many of the petroglyphs are ruined or gone because of erosion. Thankfully they were photographed and documented.

There are other locations in the Driftless Area where rock art has been discovered. You can find more information at the Mississippi Valley Archaeological Center.

My brief visit to Pine Bluff had to end. I had a load of wood to stack and afternoon chores to complete. But perhaps I will return with my grandsons, as the next generation leaves their mark on the sandstone.

Initials carved into rock is hardly art, but perhaps we share the same desire as those who walked these lands before us.