Home » Bits from Brambleberry » From farmer to butcher 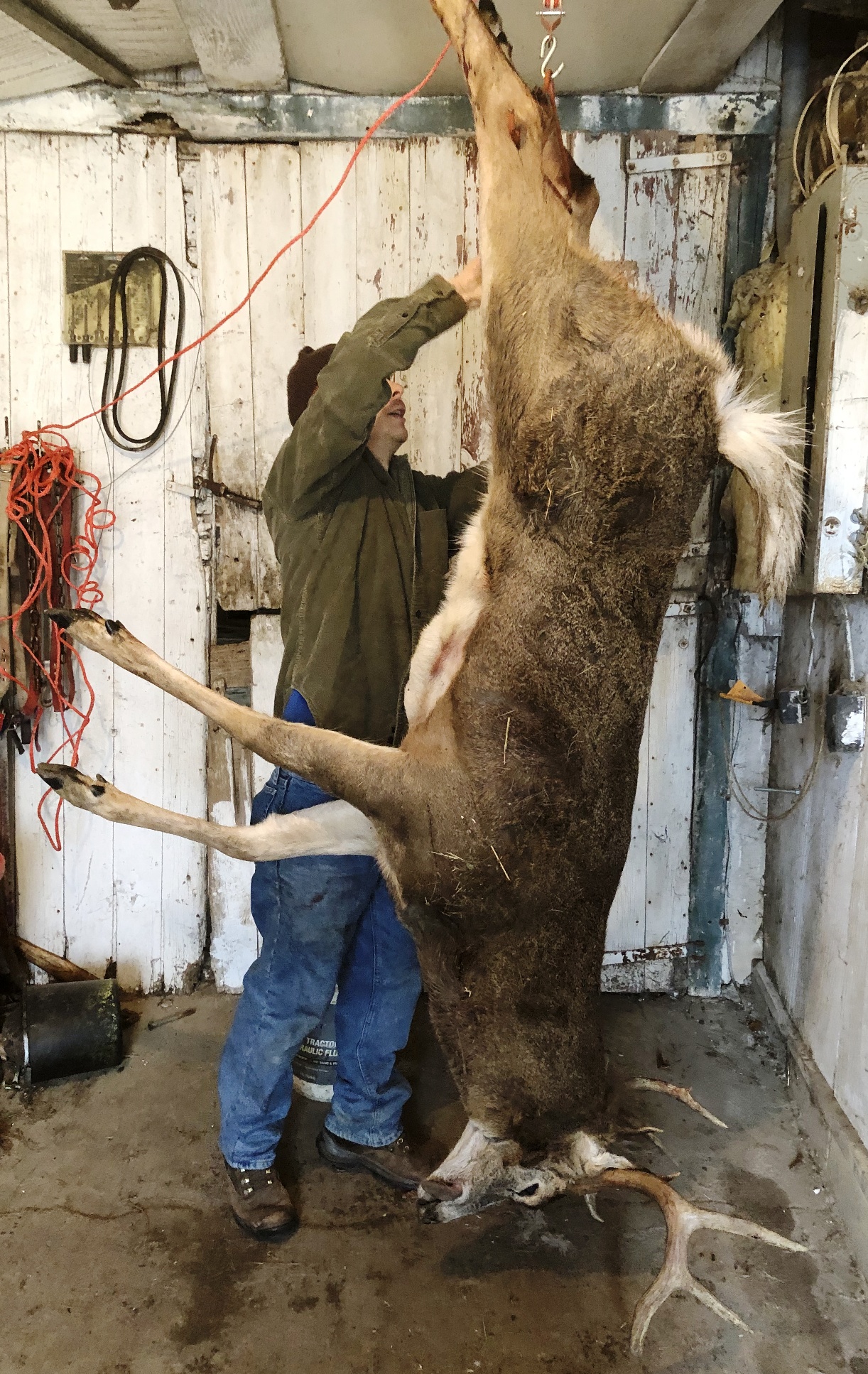 One trait that is universal with all small farmers is the do-it-yourself mindset.

This is not unique to farmers, but figuring out how to get it done is as ubiquitous to farmers as carrying a pocket knife, pliers or a multi-tool. When there’s a breakdown or a snafu, there’s usually a repair, process or procedure that can be implemented or invented to get the job done.

My repair prowess pales in comparison to many but I’m never shy about giving it a try — especially when baling twine is involved. Perfection it ain’t but there are always multiple ways to remove feline pelts.

Actually it’s another skinning — removing the hide from a deer — that comes into play with this story and it’s only part of the process.

I can’t remember the exact year but for at least 20 years or so our family has processed our own deer. I think it started due to the male family genetic trait of procrastination. My dad had shot a deer — per usual — and failed to line up a processor. It may have been a change in the weather or that she was sick of looking at a dead deer in the tree but my mother started cutting it up.

We used to butcher on picnic tables in my parent’s unheated garage but moved to the heated milkhouse when the dairy cows were sold. We use an oak table built by my grandpa and the stainless steel sinks with hot and cold water come in handy for cleanup.

Some may wonder why deer are hung from game poles — or in our case sturdy limbs on the maple trees in the yard. Like beef, most deer benefit from some aging — particularly the older bucks. The worst thing you can do is cut up a deer right away and freeze it — rigor mortis sets in and the meat gets tough.

Aging the meat helps break down the collagen — long muscle cells in the meat — with natural enzymes. Five to seven days is a good range for aging venison. Since most of our deer are killed opening weekend, we hang them until the end of the week.

In a perfect world, the temperature would stay between 35 and 40 degrees. There have been some years where I had to pack the body cavity of the deer with ice and other years when the deer have frozen solid. Skinning a frozen deer by hand is like separating lint — a tedious process best avoided.

Black Friday on our farm is usually Butchering Friday. Some years we had four people helping — each with their specific task. Dad would usually skin and quarter, my son Ross and I would cut and debone and my mother would grind hamburger and wrap.

Waste not, want not is a good rule but over the years I’ve learned that it’s nearly impossible to remove all of the sinew from the shanks. If you don’t, it will plug up the grinder if you’re making hamburger or result in very chewy stew meat. But before you know it, you’ve spent 5 minutes trying to salvage a piece of meat the size of a quarter. And unlike beef fat, deer fat does not taste good.

One year when my brother owned a small grocery store I joined a group that would butcher deer overnight. We would process between 20 to 25 deer and have everything cleaned up for the next morning — when I could barely move my fingers. We all got a cut — no pun intended — of the basic butchering charge, which I believe was $40.

You can still find many places to have your deer processed commercially, with prices depending on whether the deer is simply cut and wrapped or whether you’re adding additional meats to make sausage and bologna. It’s easy to start spending hundreds of dollars before you get your venison back.

Over the years we have collected an assortment of butchering tools — sets of knives, a deer hoist and gambrel, a heavy meat grinder, a bone saw — the essentials to making the job go faster.

This year the butchering team was down to two — Ross and me. We rounded up the tools, pulled the three good-sized bucks from the tree and by the time we started skinning it was about 10 a.m. — well past the time when the Black Friday stampede is usually over. We took a short break for lunch and by the time we finally finished cleaning up, it was past 7 p.m.

We were also slightly delayed when the trash can full of deer legs and scraps fell out of the back of my pickup on the way to dumping it in the woods and we had to pick up the pieces in the dark.

Sure, I can afford to have my deer processed. Yes, time is worth money. But it was a day of quality time with my son, a chance to tell a few stories and carry on a family tradition.

The bonus is the satisfaction of a job well done and venison in the freezer.